MilMo is a video game developed by Dohi Sweden. It was first released as a browser game in December 2009 but has ported to PC/MAC in 2018. It is a 3D free-to-play Action Adventure MMO game.

The word MilMo is an abbreviation for Million Morning.

The engine behind MilMo is called Unity.

Do you already have an MilMo avatar connected to your Facebook login or "WebLogin"? Then you can follow this guide to connect it to your steam login as well!

You can always start playing MilMo with a new account by launching the game.

For more info or help, visit our page on Facebook

The "WebGL" version of MilMo was ended.

Five years later, in December 2017, Dohi Sweden came back onto the MilMo scene with a new team under the leadership of Jonathan Timmerlid, with a Facebook announcement that MilMo will be revived and ported to WebGL format. The port finished in early 2018 and was successful, with many players returning to the game. A Steam port took place, and the Steam version of MilMo was released on August 2, 2018, gaining high reviews.

The History of MilMo[edit | edit source]

First things first. Junebud was formed back in the summer of 2008 when some of the veterans from the traditional PC game industry decided they had grown tired of making war games. The web 3D games were an emerging market and the Unity game engine had just arrived to the scene. The free to play busies model seemed to be working nicely on the Asian market. Junebud wanted to create something truly unique and fresh, so we combined the power of streaming with our very own art direction and the free to play model. This mix was named Million Morning, and eventually got the name "MilMo".

Basic movement tests of the avatars. Do you recognize Lightmill Island?

A lot ideas for current islands were born back then. Some of you might recognize Lightmill Island from these old pictures. The MilMo art direction is a bit rough, but it's there. The hardest part was to make all the basic things work, like the laws of physics, movement and collision. When making a video game you need to construct all these things that naturally exists in the real world.

A early boy avatar. These are some of the first pictures ever taken inside MilMo.

As you can see the sky is still pretty realistic and the landscape is just basic blocks and shapes, but the feeling is there. We knew pretty early this game was going to be about exploring. We wanted to create a mix between Zelda, Super Mario and Maple Story. There should be puzzles, questing, a social aspect, enemies to fight and secrets to unveil. 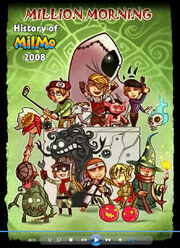 A screen shot from an early promotional video.

A lot of concept art was created during this time to determine the right look and feel of the game. Concept art is great, it unites the team's perception of how the game should look and feel. It serves as a guide line for the level artists.

We experimented with more realistic looking avatars, but soon settled for the cartoony ones. We aimed for a style of old western comics, nor manga or anime. Many members of the Junebud Crew enjoy drawing and reading comics such as X-Men, Spider Man and the old Super Man, which is shown in the crisp art direction.

During 2008 the Junebud Crew slowly grew and recruited new members, a mix of old game developer veterans and handpicked new talent from the game development program at the University of Skövde in Sweden. We made all the necessary preparations for moving in to our very first office. In the early beginning all meetings were held on phone and by web cam, since the crew members were spread across the country. That required a lot of discipline and good communication. Today we have an open work space at Junebud, which promotes the communication and reduces the necessary paper work.

This was the year Junebud finally released the closed beta version of the game, just before Christmas.

At this point MilMo was still a mix between realistic looking materials and cartoony avatars. The water found in the pool at Seastar Resort (or Summer Island as it was called in 2009) was way more realistic than today. The same can be said about the ocean.

They are a bit rough, but the avatars are staring to look more and more like the modern MilMo avatars.

Picture of early Seastar Resort from inside the Unity editor.

Seastar Island was a mix between the modern Nikonos Island and what came to be the chat level Seastar Resort in 2010. There are also some details from Lightmill Island, like the mill. As you can see the buildings were all white, but the structure of the buildings and the flower shaped umbrellas still remain today. The trampolines were removed later on, and the buildings made orange.

Girl avatar at the old Seastar Resort before it became a chat level.

The boy is holding an early version of the bat. Can you see the big rhubarbs in the background?

A girl avatar smiling by the pool.

The two main goals of 2009 were to release a playable beta version of the game on milmogame.com, and make sure enough talented people joined the Junebud Crew. We wanted to create a balanced mix between experienced game developers and new, young talent. If your crew only exists of veterans you will not get new, fresh ideas and find out what's hot and whats not. On the other side, if you have a majority of juniors there's a chance a lot of confusion will arise since there's not clear vision or experience of how to handle previous challenges. It's one thing to make games for fun or at school, but another ting to make them for living.

Early concepts for different MilMo islands. Some of them made it to the game, some did not (yet?).

Above you can see some early concepts of Summer Tide Saga islands. At this time Summer Tide Saga was just called the "Summer World". At least six of these islands can be found in-game today: Swamp Island, Rose Island (the old one), Sage Oak Island, Lightmill Island and Alien Ruins. The first level concept art ever created actually shows Visitor Island, but the island itself was released almost 1,5 years later. When we released the MilMo beta in late 2009 it only featured one island, the Summer Island.

Early version of Kraken Island. The water is still pretty realistic, but the characteristic MilMo clouds are there!

the MilMo beta in late 2009 it only featured one island, the Summer Island.

Early version of Kraken Island. The water is still pretty realistic, but the characteristic MilMo clouds are there!

Now it's only about 1 month left for the game until we let players in. Note the lack of interface, only an early version of the shop button is visible.

Swamp Island and Rose Island. One month left to the closed beta launch.

At this point MilMo as we know it is starting appear. The water is not as realistic anymore, the chunky trees are being replaced by more MilMo-ish ones, the avatars are starting to look smooth and the art direction is more consistent. We wanted to create a unique look for MilMo. It should be possible to identify the game with one single screen shot taken anywhere, on any level.

The MilMo forum goes live in late 2009. The main function of the forum back then was to help players report bugs (which they were really good at!).

The very first splash screen ever to be used at the at milmogame.com

In December 2009 we finally launched the first version of the game. At this point we had no idea the game would be translated into Brazilian Portuguese. There was only one MilMo available, and you had to sign up and get a beta key in order to play. There was no world map, no friend list, there were coins instead of gems, a very basic medal track and only 1 island. It was time for the first players to start exploring what we had built for the past 1,5 years. The big challenge of 2010 would be to expand this tiny island world start finding and fixing all the bugs.